Why Is TAG Heuer Hated So Much? 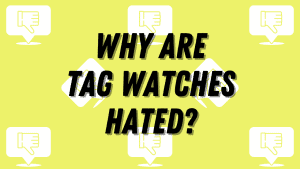 People often wonder; why is TAG Heuer hated so much.

For a lot of watch nerds TAG Heuer is a watch brand that many mock and say that they would never ever want to own.

In this blog post we’re going to try and answer the question; why are TAG Heuer watches hated so much in the watch community?

Is this hatred warranted, and what will TAG Heuer ever not be hated?

Why Is TAG Heuer Hated?

Heuer was an old watch brand that dated back to 1860. Heuer was known for their chronographs.

One of their chronographs was even titled the first Swiss watch to make it into space in 1962!

So Heuer was prestigious, and still is. However, Heuer was bought by the TAG Group in 1985. The TAG Group then created the watch brand we know today; TAG Heuer.

TAG Heuer did flourish in the 1990s and mid 2000s as a luxury Swiss watchmaker. However, things have declined in the more recent decades.

For many watch enthusiasts, TAG Heuer just seems to be a watch brand without an identity.

The TAG Group brought marketing might and capital to Heuer. And TAG is where many people lay the blame for the company ruining the prestige of the Heuer brand.

Christian, from the YouTube channel Theo and Harris, outlines how TAG Heuer has a big identity crisis that really has plagued this brand.

For many watch collectors, TAG Heuer today comes across as a confused brand with confused marketing. A watch brand that doesn’t understand who their target market is.

They should focus on what they do best. Their sports sponsorships are huge. Sticking to this will improve their branding and their core message.

However, what we’ve seen them do over the years is take on a myriad of random partnerships with celebrities.

Actors, models and other celebs. This dilutes down their core branding with sportsmen and women.

The Cara Delevingne campaign was mocked by many in the watch community. We honestly can see why, especially the poster on the left.

Now we don’t want to give any hate to Cara, but we’re wondering what TAG was thinking…? This is confused marketing at its worst.

For a watch brand that is all about sports and creating sports focused timepieces. Why would they hire a supermodel after a champion tennis player, to promote their watch. It doesn’t add up.

Many in the watch community simply believe that TAG Heuer is overpriced. Overpriced for what you get compared to other luxury watch brands.

However, this is a sticky subject. As watch brands are in the watch business in order to make profit. Yet, are TAG Heuer watches really that over priced?

Many would say yes. But price can be really subjective.

4. Claimed a Seiko movement as their own

In 2009 TAG Heuer released the Caliber 1887, and TAG marketed it as their own in-house movement.

Yet, it was later proven that it wasn’t an in-house movement built solely by TAG, and it wasn’t even entirely Swiss made!

Yet, Tag Heuer claimed that the movement was made in-house!

They really should have just been honest. Said that they had modified a Seiko movement. No one would have cared. As they made some good modifications to it.

But lying about building the movement in-house, and then everyone finding out it was a Seiko to begin with. Talk about a bad PR move!

The final reason for why TAG Heuer is hated by so many watch collectors. Is simply that people love to hate.

It’s a sort of groupthink mentality in the watch community, like any community.

There are just some brands that everyone loves to hate. Hublot is another watch brand that all the watch nerds love to hate.

However, remember that it’s alright to have an opinion. But in the end don’t be a watch bully, as no one likes a bully.

Will TAG Heuer ever not be hated?

In order for TAG Heuer to be welcomed into the watch community, as a brand that watch collectors love. A lot would need to change.

One of the best collections of the TAG Heuer range is the Monaco collection.

The Monaco collection from TAG Heuer is a still a legendary collection of watches.

This square case chronograph was released first in 1969. It’s still considered one of the best TAG Heuer watches today.

The Monaco watch represents what Heuer was, and what TAG Heuer could be. If it just sorted out its focus on one target market and got rid of all this confused marketing and identity crisis.

Yet, many think the new direction that TAG Heuer has taken with their Connected collection of Swiss made smartwatches is a smart move too.

Smartwatches are here to stay and TAG Heuer have positioned themselves as a better alternative to Apple watches. By promising to do regular software updates on all current smartwatches sold.

This allows TAG to improve their smartwatches that are already sold, and keep their customers happy. This was promised by their CEO Frédéric Arnault in a GQ interview.

So the future isn’t bleak for TAG Heuer, and maybe they could turn it around by focusing both on their heritage and prestige with Heuer.

Then also pushing the boundaries on their high tech Connected smartwatches, which are now one of the favorite Swiss made smartwatches.

Another watchmaker that gets a lot of hate from the watch community is Hublot.

Discover why Hublot is hated so much.

Heuer was founded in 1860 in Switzerland by Edouard Heuer. This watch brand had a history of making chronographs loved by racing car drivers.

Heuer was even the first Swiss made watch in space! In 1962, John Glenn wore a Heuer chronograph.

Then Heuer was taken over by the luxury TAG Group in 1985, and the watchmaker was transformed into the TAG Heuer brand.

TAG Heuer today is a Swiss luxury goods company that creates watches and so many other fashion accessories.

TAG Heuer also licenses out their name to other companies to manufacture other goods, from sunglasses to phones. Allowing them to use the brand name.

Now TAG Heuer is owned by the huge watch group LVMH, since 1999.

TAG Heuer is one of those watch brands in the watch community that everyone seems to love to hate.

Whether you agree that TAG Heuer watches are overpriced, or that they have confused marketing and don’t know who their target market is. That’s up to you.

At the end of the day wear the watches you want, and don’t mind what others think.

TAG Heuer still make some cool timepieces, regardless of what any says.

Their Monaco collection is still a classic square racing chronograph.

While their sports focused Connected smartwatches are some of the best Swiss made smartwatches on offer. With free software updates for as long as you own them. So they could give the Apple watch a run for its money. Which is what we like to see.

So make up your own mind on this brand.

Have TAG Heuer made mistakes? Yes, they’ve made many.

But is the brand salvageable, we think so. We’ll just have to wait and see.