Top 60 Watch Quotes That Will Inspire You 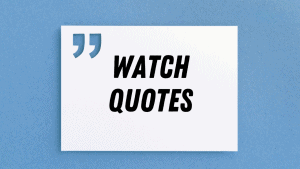 The watch industry is a multi-billion dollar business. It’s no surprise then that there are many famous quotes about watches.

This blog post will explore some of the best quotes about watches. With 60 of the best watch quotes ready to inspire.

From funny watch quotes, to kinda sad watch quotes, while some of these quotes will make you even a little bit mad. But of course we’ve included some beautiful quotes about watches too.

Now find out which timepiece quote is your favorite down below.

Here are 60 of the best quotes about watches that we could find.

When it comes to watches, it’s ironic that you can spend thousands on an exquisitely made mechanical watch, and yet it will be less accurate than a five-quid digital bought from a petrol station.

I always judge a man by his shoes and his watch.

I have some wonderful suits in my closet, a lovely car, some refined watches.

I love watches, the mechanism.

I am fascinated by Omega’s history. Particularly the First World War stuff, when they made watches for the flying corps, and the NASA side of it.

A gentleman’s choice of timepiece says as much about him as does his Saville Row suit.

Everyone looks at your watch and it represents who you are, your values and your personal style.

Time does not end when your watch stops.

One time, I had a guy, when I was performing at Caesar’s Palace, and during the course of the show, I offered him an anniversary gift for him and his wife, and it was her watch wrapped in a little package.

I have nice watches. I don’t set them.

We’re all so digital, but the ’50s was the era of watches you had to wind. When Sir Edmund Hillary and Tenzing Norgay reached the summit of Everest in 1953, Hillary was equipped with a Rolex Oyster Perpetual.

I got players with bad watches – they can’t tell midnight from noon.

She touches her wrist where her watch used to be, her fingers lost without time to hold on to.

Every man needs a good, solid watch. My favorite watch is the Presidential Rolex. I own many watches, but this one is usually the one on my wrist. I buy mine in the Diamond District in New York City. Classic.

Look, he’s winding up the watch of his wit; by and by it will strike.

I never look at my watch when I’m sketching.

I had always wanted a watch. Unlike diamonds, watches were practical. They were for people on the run, people with appointments to keep and schedules to meet. That was the kind of person I wanted to be.

As a realist, you must give me the watch and not the time.

I do like watches. I like the sophistication of it all. Like the whole thing behind collecting watches is very grown man-esque, so it makes me feel more an adult.

I’ve always been interested in science. I used to take watches apart and clocks apart, and there’s little screws, and a little this and that, and I found out if I dropped one of them, that thing ain’t gonna work.

Some watches I bought, I think now, ‘Why the hell did I pay that much for a watch?’

I want people who see my watches to go, ‘Wow!’ And the more they look at them, the more they go into it, the more I want them to say, ‘Wow!’ I work on a razor blade between gimmickry and amazement.

The key to wealth is that it doesn’t matter. Once you’ve had it, you don’t think anything of it; you can wear cheap watches.

Jewelry isn’t really my thing, but I’ve always got my eye on people’s watches.

I like a few vintage Rolexes, and Panerais are good. I’m not into sports watches – I like chronometers.

It’s sad that the cell phone is replacing the watch as a time-telling device. I wear a vintage watch that’s really skinny.

For our teams that do great work, we have a tradition of giving Rolex watches. If you see all the key guys with their Rolexes, that’s sort of our Medal of Honor if you do something big.

A Rolex watch or an expensive car are the things guys often use to show status, wealth, and basic desirability.

The world embarrasses me, and I cannot dream that this watch exists and has no watchmaker.

I’ve spent as much as 30 grand on a watch but it’s not about flaunting my wealth. I don’t have many extravagances but watches are my biggest one. I must have 30 of them now. I’ve been collecting since the age of nine, when I won a black TAG in a karting event.

Time is irrelevant to me. I never wear a watch.

Like most guys, I’ve always liked watches. I can always check the time on my phone, but having a watch is so much better.

I think Apple Watch might be a tougher sell to current watch wearers than non-watch wearers. Non-watch wearers have an open wrist, and if they cared about the glance-able convenience of an always-visible watch dial, they would be wearing a traditional watch already.

You don’t want to work on a job where you’re looking at your watch.

My wrists, which are tattooed with my daughters’ names, are always occupied by a watch.

The key to getting work done on time is to stop wearing a watch.

You can have your own watch and always doubt it. If I had a watch I’d probably always be doubting it or the batteries would be dying. I just know that people always have trouble with their watches, and that’s why I like public clocks

I don’t know how we can compare the old watches we know with the functionality and the capability of the Apple Watch.

Guys only really have watches and cars as show pieces, and that’s why so many men love their watches – it’s our show piece, it’s our style. And what I like especially about Hublot is the variety.

Everything is customised, from my watches to my phone. I like my things to be different.

I’m very proud of my gold pocket watch. My grandfather, on his deathbed, sold me this watch.

When I started to get all that money, I started to buy a lot of watches. I bought 6 to 7 watches, the rainbow Rolex… In a year, I had spent $3.3 million just on the watches.

I have a weakness for watches. I have to stop myself buying more.

Watches are the only jewelry men can wear, unless you’re Mr. T.

Dictionaries are like watches, the worst is better than none and the best cannot be expected to go quite true.

The half minute which we daily devote to the winding-up of our watches is an exertion of labor almost insensible; yet, by the aid of a few wheels, its effect is spread over the whole twenty-four hours.

Music is art, and making watches is art, too.

People think a watch must weigh a lot to be a luxury. But there’s no reason why we should add weight to create value. People have to overcome these notions.

Either he’s dead or my watch has stopped.

The Black Mamba collection of watches is me: It is my alter ego, so to speak. As I mentioned before, it is sharp, cutting edge and sleek which are characteristics I try to apply when I’m out there on the basketball court.

I would much rather invest in stocks, bonds, private equity and hedge funds than watches.

I am very, very conscious of time. I always wear two watches. People ask me, ‘Why do you do that?’ Because I was late once,and it cost me a huge opportunity.

I’ve always loved watches my whole life. When I was growing up, I always thought of having a great watch as that next step – of making it, of a rite of passage.

I am always wearing a bracelet, necklace, and watch. I don’t even care if they don’t match.

I’m not one of those crazy collectors – I don’t have a hundred watches. Only five or six. But I do like to wear a nice watch, especially if we’re on the road and I’m wearing a nice suit.

I’ve always loved watches. It’s been the one thing that I’ve asked for, whether it was every Christmas or a birthday.

I collect watches because I’m always late, and I need to know exactly how late I’m going to be – in order to come up with a good excuse.

We hope you like some of these funny, beautiful, and interesting watch quotes. Why not check out more interesting blog posts from our watch blog.