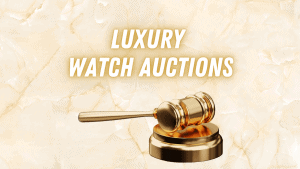 You hear of sensational sales of big-name brands at many high-end auctions around the globe.

They’re also a great place for beginners to buy their first collector timepieces. Plus today most auction houses host online auctions, as well as live auctions too.

Check out the best luxury watch auction houses from around the world.

Find out about each watch auction, and what makes them so popular with timepiece collectors.

Antiquorum was established in 1974, in Geneva, Switzerland.

This auction house sells a wide range of modern and vintage timepieces. They’ve sold some historic pieces too.

Like the Longines wristwatch that Einstein owned. Sold for $596k in 2008.

Antiquorum holds around 10 auctions each year. Check out the Antiquorum Watch Auction Calendar.

They also have offices in Milan, Munich, Paris, Shanghai, Bangkok, and Singapore. Their staff are experts and able to help with a valuation of a timepiece.

Artcurial is an auction house for many luxury goods, not just luxury watches.

Check out the Artcurial Auction Calendar to see the latest auctions that are coming up.

Founded in London, in 1793. This auction house is one of the most renowned auctioneers in the world. They specialize in fine art, antiques, cars, luxury watches and jewelry.

Here you will find all of the major luxury watchmakers.

They run many watch auctions each year. You can check out the Bonhams Auction Calendar to plan your next visit.

Bonhams run watch auctions at least twice a year, at each of their international flagship locations.

Take a look at a timepiece auction taking place in Bonhams London, in the video below.

Christie’s is another huge name in the watch auction realm.

They feature all of the big names. Like Breguet, Rolex, and Patek Philippe to name a few.

The most expensive wristwatch sold at the Only Watch charity auction, was hosted by Christie’s, in Geneva.

You can check out the Christie’s Auction Calendar to keep up to date with the next wristwatch event.

However, they don’t just offer watch auctions. They offer around 350 auctions each year, in over 80 different categories. So there’s plenty to choose from.

Fellows & Sons is a leading auction house in the UK. Established in 1876. They hold over 100 auctions each year in watches, jewelry, antiques, and other categories.

It first began in Birmingham, and now it also has an auction house in London.

The auctioneer sells around 7,000 luxury watches every year. Making it the UK’s largest watch auction house.

The watches on offer are diverse. You can view the Fellows & Sons Auction Calendar, to plan your next wristwatch auction.

Hindman Auctioneers specialize in auctions of many luxury goods. Including, at times, jewelry and watches.

Timepieces that have been sold in their auctions have dated as far back as the 16th century, and up to the present day.

Check out the Hindman Auction Calendar to find out what auction is on next.

They’ve got numerous locations across the USA in many different cities. Check out their office contact details here.

Live Auctioneers is a website that will connect you to thousands of live auctions.

You have the option of leaving absentee bids or taking part in a live auction in real-time.

Set up in 2002, this New York-based auctioneer has revolutionized the auctioneering industry.

They’ve got a huge database of Auction Price Results. This is an excellent research tool if you’re looking to buy or sell an item at auction.

You’ll find huge amounts of watches available every day on this site.

Live Auctioneers also have an Auction Calendar you can keep an eye on.

The Only Watch is a charity auction. Where they auction one-off timepieces donated by the world’s top luxury watch brands.

Founded by Luc Pettavino in 2005. To help fund research to find a cure for Duchenne muscular dystrophy. A condition his son died from at 21.

So far the Only Watch auction has raised $70 million dollars. With 99% of that going to charity.

The next Only Watch Charity Auction is on the 19th of November 2021.

Learn more about the Only Watch Watch Auction.

Most Expensive Watch Ever Sold At Auction

This auction holds the record for the most expensive wristwatch ever sold at auction.

The Patek Philippe Grandmaster Chime Ref. 6300A-010. Sold for a staggering $31 million dollars in 2019. Making it one of the most expensive watches in the world.

Phillips auction house focuses on buying and selling the world’s top 21st century and modern watches. They also deal in art, jewels, photography, and design too.

They’re the forward-thinking, contemporary auction house on this list.

Their auction house in New York is where Paul Newman’s Rolex Daytona was sold for an amazing $17.7 million dollars. Making it one of the most expensive watches ever sold.

You can view the Phillips Auction Calendar to keep on top of live or online auctions.

Now you can bid on watches from anywhere, using their app or website.

Sotheby’s is a world-famous auction house.

Founded in Britain in 1744. It’s now headquartered in New York and has 80 locations in 40 countries worldwide.

They specialize in a wide range of items. From art to coins, stamps, wine, jewelry, and of course watches.

Check out the Sotheby’s Watch Auction Calendar to stay up to date.

In April of 2020, Sotheby’s launched their Watches Weekly. This is an online auction for a new selection of luxury watches. Unveiled once every week.

These weekly watch events are very popular with new buyers. With Sotheby’s stating that 54% of their sales are first sales. And 40% of the buyers are under 40.

A whole new, younger generation is taking an interest in luxury watch auctions.

Sotheby’s also has a really active YouTube Channel. Check them out to get an inside look into the legendary auction house.

Luxury watch auctions are now booming more than ever. Thanks to the growth in popularity of online auctions.

Next, check out the top 10 most expensive watches in the world.