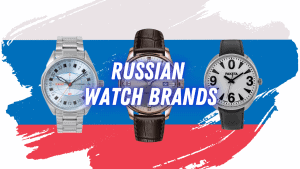 Russian watch brands are best known for their quality and affordability.

The Russian and Soviet watchmaking history isn’t as long as other watchmaking countries. But Russia has a rich heritage of watchmakers that took off during the Soviet Union.

Many Russian watch brands have a niche cult following now.

One of the world’s cult-favorite watch brands from Russia is Vostok.

Here are the top watch brands that are still leading the Russian watch industry.

Today, many Russian watchmakers are still selling Soviet-era watches…check them out and discover which Russian watch you’ll choose next.

Vostok was founded during WWII. This Russian watch brand produces tough mechanical timepieces that have a cult following.

Released in 1967, it was named the Vostok Amphibia. It’s still popular and in production today.

Their newer Amphibia models can withstand 30 atm (300 m depths). They also come in a wide range of case designs and extra complications. Yet, are still a very affordable dive watch.

It was a watch designed for the Soviet navy and military. And to this day still supply watches to the Russian military.

You can find a huge choice of affordable and cool Vostok watches on Amazon.

The Russian watch brand produces all of its watches in-house. In the Raketa Watch Factory located in Saint Petersburg, Russia.

Their the more luxurious watch brand on this list. Famous for their avant-garde timepieces.

The big circle is Earth, the small circle is Jupiter, and they both rotate around the sun.

Their Big Zero collection has ensured that all Raketa watches feature numeral indices. Now have a 0 instead of a 12. The Big Zero range is what started this trend.

Raketa was the watchmaker that designed tool watches to accompany explorers on their Polar expeditions during the 60s and 70s. Their Polar Circle collection continues on with these timepieces.

Sturmanskie watches were first manufactured for the Soviet military in the 1950s.

They’re best known for making a watch for Soviet cosmonaut, Yuri Gagarin. Who wore the watch on the world’s first manned space flight in 1961.

Sturmanskie was worn by other Soviet cosmonauts. Cementing itself as a Space worthy watch brand.

Explore a selection of

Or take a deeper dive and discover even more Sturmanskie on eBay.

Poljot is a Soviet watch brand produced by the First Moscow Watch Factory.

Their watches were used in many big Soviet space missions.

The Poljot STRELA space watch was wrn by Cosmonaut Alexey Arkhipovich Leonov in 1965. He performed the first human space walk while wearing his Poljot watch.

Check out our space watch blog post, to discover all the top watches that made it into outer space.

This Russian watchmaker sadly no longer produces watches. Instead the Russian brand STRELA continue the legacy of Poljot.

But, there are still many vintage Poljot timepieces on the market.

A great place to hunt down vintage Poljot watches is on eBay.

This watch brand began in 1930 but was reborn during the war in 1941. At the Zlatoust Watch Factory.

They were the watch company that equipped all of the Russian militaries in WWII. Producing marine and aviation chronometers.

The Russian watchmaker also produces modern dive watches. Minus the radioactive materials, which they used in the past to make them glow in the dark!

The Soviet watch brand was a firm favorite of pilots and cosmonauts.

Alexey Leonov wore his own personal Piljot STRELA on the world’s first spacewalk, in March 1965.

However, they’re now a combination of Russian and German watchmaking. With their headquarters located in Munich, Germany right now.

This move has made some watch enthusiasts no longer consider modern STRELA watches as truly Russian.

Yet, they still have to be considered one of the top watchmakers of the Soviet era. Learn more about STRELA and its ties to the Soviet Space Race.

Check out their Russian timepieces on eBay.

Russia has a selection a few great watchmakers, from modern and Soviet times. Find more watch brands from around the world.