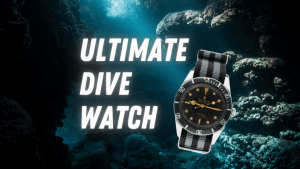 This blog post will help you discover the amazing history behind the Rolex Submariner.

The Rolex Submariner history starts in 1953 and is still going strong to today.

We’ll see how the Rolex Submariner has changed throughout the years, to make it more appealing to new audiences and stay relevant in today’s world.

When you say “watch” most people picture something similar to the Rolex Submariner. With its black dial, stainless steel, rotating bezel, luminous hands, and comfortable bracelet.

Showing us that the Rolex Submariner is truly something special.

Rolex released their very first Rolex Submariner in 1953. It was the world’s first commercially made dive watch.

There is a bit of debate around which of the Submariners came first, it’s between the references 6204 and 6205.

At the time, scuba diving was a fairly new sport. The Submariner grew with the popularity of the sport.

Also the earliest Submariners came with no crown guards to protect the watch’s crown.

Plus the case size of the earlier Subs were definitely small by today’s standards. With the Rolex Submariner Ref. 6204 and 6205 measuring 37mm in diameter.

The first dive watch that Rolex debuted at the Basel Fair (now called Baselworld) in 1954, was the Submariner. The Rolex Sub was also debuted with the Rolex Explorer, as well as the Rolex Turn-O-Graph.

Even back in 1954, the Basel Watch Fair was considered a very prestigious event for all the Swiss watchmakers.

Crown Guards On The Submariner

Then in 1959, Rolex decided to modify their Submariner collection. They did this by increasing the case size up to 40mm.

They also modified the case by adding crown guards, which would protect the crown on the Submariner.

The first crown guards were added to the Rolex Submariner Ref. 5512. They were square crown guards.

However, the style of the Rolex Submariner did change again briefly in 1959. This time to the eagle beak crown guards on the Ref. 5512 Submariner.

You can learn all about the watches featured in the James Bond movies in our ultimate guide.

The Rolex Submariner of the Sean Connery James Bond films is now nicknamed the James Bond. Due to it featuring in so many movies.

It was also nicknamed the James Bond NATO, due to its nylon strap.

The Submariner Ref. 6538 is a very sought after vintage watch, thanks to these movies.

The Rolex Submariner has two main versions – one with a date function and one without. The original Submariner, which was first launched in 1953, was created without the date function.

The very first Rolex Submariner equipped with a date complication was the Submariner Ref. 1680, released in 1967.

Many Rolex purists today would regard the ‘No Date’ model’s truer interpretation of the original Rolex diving watch. Also purists believe that the symmetry of the Rolex Subs that have no date on the dial, look much more appealing.

Nowadays there are many fans on both sides for different reasons: those who favor advancement want to have access to all functionalities, while others lean towards nostalgia and prefer not having too much information at their fingertips.

In 1969, Rolex released their first gold Submariner. It was a gold version of the Submariner Date Ref. 1680. A very flashy gold watch, that really stood out with its black dial.

To this day, Rolex has the Submariner Date in yellow gold versions on offer.

Sapphire crystal was first used on a Rolex Submariner in 1979. The Submariner Date Ref. 16800 was the first collection to feature this scratch resistant crystal.

Now sapphire crystal is standard for all Rolex Submariners.

In 1985, Rolex became one of the first wristwatch manufacturers to utilize 904L stainless steel in their watchmaking process.

They use this steel because it not only takes on an incredible polish compared with other types of steel, but it’s also more resistant to corrosion and requires specialized equipment if used for production purposes. Making this type of steel super exclusive too.

The first Submariner to be made using 904L was the reference 168000, first produced in 1987. This watch is a super rare timepiece, as it was only in production for 7 months.

Today, all of Rolex’s steel watches are made from 904L steel. Also since 2018, Rolex has referred to 904L steel used in their watches as Oystersteel.

Two tone watches were all the rage during the 1980s, and Rolex Submariners weren’t immune from this.

In 1984, Rolex released a two tone steel and yellow gold Submariner. Known as the reference 16803. It also came with a beautiful blue dial and bezel too.

This watch was given a nickname by the Rolex fans, it was called Bluesy.

You’ll also see these two tone watches get referred to as rolesor, which means two toned; gold and steel.

The Bluesy does have another version, that isn’t blue, instead it has the two tone steel along with a black bezel and dial. Yet, the Bluesy has proved more memorable in the long run.

Bluesy has been updated a few times, once in 1988, and again in 2020. Yet, the watch still keeps true to its two tone and blue bezel.

The latest version has a gorgeous sunburst dial and a shiny ceramic bezel insert too.

Released in 1984, the Submariner Ref. 16803 (the Bluesy), was the first of many Rolex Subs that would feature a blue bezel or a blue dial.

One of the all time favorite blue Rolex Submariners is the Smurf. The Smurf was released in 2008, and became a go to watch for athletes and celebrities.

The Smurf is officially referenced 116619LB. The LB stands for Lunette Bleu, which is referring to the blue bezel.

This watch was also the first Submariner to feature a ceramic bezel insert. A ceramic bezel is desirable on a dive watch as it has a higher scratch resistance than aluminium bezels.

When you see an LV at the end of a reference it stands for Lunette Verte. Which is French for green bezel.

In 2003, with the 50th anniversary of the Rolex Submariner, we saw Rolex release their first green bezel Submariner. This watch was nicknamed the Kermit by fans.

Then, in 2010, there was another green Submariner released. This time it was nicknamed the Hulk. It was bigger and a lot greener than the Kermit Submariner. So it definitely suited its Rolex watch nickname.

You can compare and contrast both the Kermit and the Hulk in our battle of the green Rolex Submariners.

The many versions of the Rolex Submariners, or simply the Subs, have enjoyed many nicknames from Rolex fans.

We’ve already mentioned a few in this blog post. From the green Rolex Subs like the Hulk, and the Kermit.

To the blue Rolex Subs like the super popular Smurf, and the Bluesy. And of course the famous Rolex Submariner Ref. 6538, that’s nicknamed the James Bond.

Rolex watch nicknames are a great way to remember the stand out Submariners, along with many other types of Rolex timepieces.

Check out our blog post on the most iconic Rolex watches and their nicknames.

The Rolex Submariner may have started its life as a no-frills stainless steel dive watch in 1953, but today it is considered to be one of the world’s greatest luxury timepieces.

Learn more about Rolex, in our blog post on the history of Rolex.