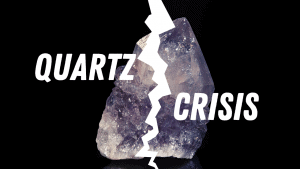 With the dawn of the 1970s came the release of the world’s first quartz watch. Which resulted in the Quartz Crisis for the Swiss watch industry.

This article will outline how the Quartz Crisis unfolded. What brands dominated, and what cool watches came out of the crisis.

Learn how and why the Quartz Crisis had such a huge impact on the world’s watchmaking world.

The arrival of the Second World War, saw the Swiss watchmaking industry boom.

Wristwatches were normalized for men, due to the invention of trench watches during the First World War.

World War Two saw the first mass produced field watches given to all soldiers in the military.

This demand gave Swiss watch manufacturers the opportunity to help meet the demand for watches worldwide.

The Swiss were producing high quality, innovative mechanical watches during and after the war. Dominating the watch industry from the 1940s to the 1960s.

The creation of the quartz wristwatch was set to change Swiss domination of the watch industry.

It was called the Seiko Quartz-Astron 35SQ. Only 100 editions were available.

It became the world’s very first commercial quartz wristwatch. Costing the same as a midsize car back when it was released.

This watch used a watch movement that wasn’t mechanical, to power the watch. It was a quartz movement.

The Astron’s watch movement was a quartz movement.

Pictured above, you can see inside the world’s first quartz watch.

A quartz movement is not powered by a wound mainspring, like a mechanical watch. A quartz watch has no moving parts.

Instead a quartz watch is powered by a battery and a quartz crystal.

Electricity is sent through the quartz crystal, from the battery. Making the crystal oscillate (i.e. vibrate back and forth).

This vibration is how the quartz watch movement powers the watch and tracks the time.

If your watch’s hands move with individual ticks. Then it’s a quartz powered watch.

Learn more about the difference between quartz movements and mechanical movements.

The Quartz Crisis was caused when Japanese watchmakers supplied the market with huge amounts of quartz watches. During the 1970s and the 1980s.

Popularity for these watches grew fast as they were more accurate and faster to make.

However, it was not just Japanese watch brands that got in on the quartz watch craze. The industry had to adapt, and big Swiss and American brands got in on the action too.

With even prestigious watchmakers like Patek Philippe, Rolex and Omega releasing quartz watches during the crisis.

People believed quartz to be the future of watchmaking.

While Japanese watch brand Seiko, released the first quartz watch. They released it in a traditional analog style.

The Pulsar was then released in 1972. Hamilton had created the world’s first ever digital watch for the public. Producing just 400 of these timepieces.

It featured an LED (light-emitting-diode) display. The watch would light up and show the time, with the touch of a button.

The watch was groundbreaking as it contained absolutely no moving parts.

The world’s most famous spy even wore this watch.

Roger Moore who played James Bond at the time. Wore The Pulsar watch in the Bond movie Live And Let Die in 1973.

Bond even demonstrated the watch to the audience. Pushing the button on the side to light up the first digital watch.

Learn more about all of the watches James Bond wore during the Quartz Crisis, and beyond.

This put LED watches out of reach for most consumers.

That was until 1975, when the manufacturer Texas Instruments began to mass produce LED watches. This time they housed them in plastic cases.

This huge drop in the value of LED watches. Seen American watch brands, like Pulsar, make huge losses with these digital watches.

LCD watches were the future now for the digital watch age.

The first LCD watch to come to market was from Seiko. It was a Seiko 06LC watch with LCD display. First released in 1973.

LED watches had a serious flaw which was that they could not display the time constantly. You had to push a button to see what time it was.

LEDs also had high levels of battery consumption. So they weren’t ideal for consumers. While LCD watches were much more economical.

During the 1970s and 80s we saw digital watches vastly improve.

The Far East was the hub for LCD watch production.

Japanese watch manufacturers dominated the scene. Seiko was the dominating brand of the quartz watch revolution.

Japanese brands Citizen and Casio were around, but nowhere near as large as Seiko.

Best Watches From The Quartz Crisis

By the early 1980s, Seiko was the largest watchmaker in the world.

However, many luxury Swiss watchmakers released quartz crisis timepieces. Here we will highlight the big players and their quartz crisis creations.

Omega was a Swiss brand that performed fairly well during this period. Releasing many quartz powered timepieces.

Quartz watches were often cool and futuristic for the time.

Here is an outline of some of the best, and quirkiest, quartz watches that came out of the Quartz Crisis of the 70s and 80s.

Mechanical watches were now viewed as dusty and old remnants of the past. The majority believed that quartz watches were the future.

The loss in watch companies and watchmakers was staggering in Switzerland. Not everyone could survive this industry shake up.

The Quartz Crisis was a huge shake up for the Swiss watchmaking industry.

There are two men who paved the way for the Swiss watch industry recovery, which began in the early 80s.

They were Ernst Thomke, and Nicolas G. Hayek. Both men worked together to save the Swiss watch industry.

In the early 1980s Nicolas Hayek was asked by a group of Swiss bankers. To oversee the liquidation of SSIH and ASUAG. These were two of Switzerland’s big watchmaking firms.

This was due to the pressure from the Quartz Crisis, and influx of Japanese quartz watches.

He believed in the Swiss watchmaking industry, but knew drastic changes needed to be made.

He merged ASUAG/SSIH into one, and restructured the entire operation. And repositioned watch brands within them.

He also invested heavily in standardization, along with automation.

All this coincided with the invention of the Swatch watch.

This is how the largest watch group in the world was formed i.e. the Swatch Group.

The Swiss watch group, the Swatch Group. Founded the Swatch watch in 1981. And then launched their first quartz watches in 1983.

Their goal was to make simplified Swiss-made quartz watches for the masses.

Utilizing only 51 parts per watch and an automated assembly line. They featured a quartz movement, were shock resistant, water resistant, and designed with really funky colors.

This brand was a product of the Quartz Crisis, and they were a huge hit in the 80s!

Swatch sky rocketed to the top of the affordable watches market. A real win for the Swiss watchmaking industry.

Swatch led the colorful watch craze of the 1980s. Check out the 1980s Swatch ad below.

Today the Swatch Group has grown into the largest watch group in the world.

The image above is what is nicknamed The Hayek Pyramid. This is the hierarchy of all the watch brands owned by the Swatch Group.

Each watch brand has a set place in the Group.

Breguet is at the top, and is the most prestigious of the brands. While Swatch and Flik Flak are the most affordable of the Group.

Each brand knows what share of the watch market they are after. Avoiding competition among each other.

This way of organizing the watch brands, is how the Swatch Group has remained so powerful and competitive.

Aftermath Of The Quartz Crisis

Today mechanical and quartz watches exist side by side in the watchmaking industry.

The Quartz Crisis did bring about huge structural changes within the watch industry. It helped form what is the basis of the luxury watchmaking world today.

Learn more about the watch groups and independent brands that survived the Quartz Crisis and dominate today.

The crisis did also bring about a later boom in vintage timepieces. As due to the crisis they’re even rarer now.

Mechanical watches are more prized and valuable than ever before.

With Swiss watch brands still at the top of mechanical watch manufacturing today.

However, Swiss watchmakers still have company at the top. In the form of Japanese watch brands, like Seiko, Casio, and more.

Thanks to the quartz crisis of the 70s and 80s. The watch industry is now enjoying a renaissance of mechanical watchmaking today.

Learn more about the evolution of the watch industry as seen through the watches featured in the James Bond movies.