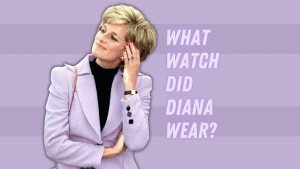 Princess Diana, who was once the Princess of Wales, was one of the most famous and loved women in history. She wore a variety of watches during her lifetime.

This blog post will discover the Princess Diana watches, from Patek Philippe timepieces to Cartier watches. With the iconic Tank watch being worn often by Lady Diana.

We’ll also answer why Princess Diana wore two watches, and we’ll also try to track down some of Diana’s watches and jewelry. To find out where they are today.

Where are Diana’s watches and jewelry now?

Diana Spencer had only barely turned 20 when she married Prince Charles, on July 29th 1981. The wedding was a sensation and was watched live on TV by 28 million in the UK.

Propelling the young and naive Diana onto the world stage. Now she was known as Diana Princess of Wales. Yet, most referred to her as Princess Diana.

Before her wedding, Diana turned 20 on the 1st of July in 1981. She was gifted this beautiful and delicate gold Patek Philippe watch.

This watch was said to be a 20th birthday present from Prince Charles.

This Patek Philippe Ref. 3618 is very rare, and made from 18K yellow gold.

Even following her separation and divorce from Prince Charles. Diana still chose to wear this Patek Philippe gold watch. Along with her stunning diamond and sapphire engagement ring.

Then there was another Patek Philippe watch that we saw Diana wear on occasion. This wasn’t actually her watch, it is clearly too big for her and is a man’s timepiece.

This watch was a Patek Philippe Disco Volante Ref. 2552. Which was owned by Prince Charles. However, you can see Diana wearing the men’s luxury dress watch on occasion.

When Princess Diana was seen wearing two watches at once, she was often wearing her own Patek Philippe that Prince Charles had gifted her. Along with Charles’ watch from the same Swiss luxury watchmaker.

Princess Diana was known for her love of Cartier watches. One of her favorite watches that she wore a lot was her Tank Louis Cartier watch.

Her version of the iconic Tank Louis Cartier watch had a yellow gold case and was fitted with a black alligator strap. A really classy dress watch.

The Tank Louis Cartier watch was first released in 1922. It became a sensation, and is considered the most quintessential version of the Tank watch.

Cartier has produced many versions of this legendary dress watch. Discover 13 of them in our guide on the best Tank watch collections.

The second Cartier Tank watch that Diana loved was her Cartier Tank Française. She was often seen sporting this stunning timepiece.

She chose a Cartier Tank Française that was made from solid yellow gold. Cartier first released this style of Tank watch in 1996.

Diana was even seen wearing this watch, paired with her sapphire engagement ring. On the day her divorce was finalized from Charles, the Prince of Wales.

The Vacheron Constantin diamond watch that Diana owned, was a wedding gift given to her from Queen Elizabeth II.

Vacheron Constantin is one of the world’s oldest and most prestigious watchmakers. This Swiss watchmaker is regarded as part of the Holy Trinity of watches.

The Federation of Switzerland had given this Vacheron Constantin diamond watch to the Queen on her wedding day in 1947.

The watch is encrusted with diamonds all around the watch’s dial and bracelet. It’s more of a diamond bracelet than a watch. A beautiful wedding gift.

Princess Diana wore the diamond watch to an extravagant White House dinner in Washington, in 1985. Where it’s reported Diana danced with President Reagan.

You might be wondering why we have listed a piece of jewelry as a watch. Well, this diamond studded choker/headband was actually a watch at one point.

It was a timepiece that was a part of a set of beautiful gemstone gifts.. They were given to Diana as a wedding present by the Saudi Royal family.

She decided to have the watch transformed into a choker first. Replacing the watch with a giant Sapphire given in the Royal Saudi wedding gift set.

Then she transformed it into a headband. Which she famously wore around her head to a dinner in Tokyo, Japan. A dinner with the Emperor Hirohito at the Imperial Palace, in 1986.

Diana was often seen wearing one of Prince Charles’s favorite watches. Which was a Patek Philippe Disco Volante Ref. 2552.

You might be wondering why Diana chose to wear two watches at once.

Well it’s reported that Diana used to wear Prince Charles’s watch while he was playing Polo. She would mind his Patek Philippe watch on her wrist, while watching her husband play a match.

Where are Diana’s watches and jewelry now?

Diana had a beautiful and priceless collection of watches and jewelry. With many of them gifted to her by friends and family from around the world.

Diana was also lent many of the Queen’s jewels to wear over the years.

However, two of Diana’s most prized positions; her engagement ring, and her Cartier Tank Française watch. Are now in the possession of her two daughter in laws; Kate Middleton, and Meghan Markle.

It’s reported that Prince Harry had the ring in his possession first, and that Prince William had swapped Harry for it with Diana’s Cartier Tank Française watch.

Kate Middleton is often seen sporting the beautiful engagement ring. She likes to pair it with her own Cartier watch, which is a Cartier Ballon Bleu watch.

Meghan was also given an heirloom of Princess Diana’s, which was her Cartier Tank Française watch.

A favorite timepiece of the late Princess, given to her by Harry.

However, Meghan has been called out for wearing the solid yellow gold watch, stacked with other jewelry.

We think that isn’t the best move as all these other bracelets stacked up against this luxury timepiece, will cause scratches to the case. Watches will always get scratches but it’s best try and reduce them.

You can check out our blog post on how to avoid scratching your watch, as we want to help you protect your precious timepieces.

This isn’t the first Cartier Tank Française that Meghan Markle has had in her possession.

She bought herself her own two-tone Cartier Tank Française watch, back in 2015. To celebrate the third season of Suits. The Canadian TV show she acted in at the time.

She was often seen wearing her own Tank Française watch too.

On A Final Note

Princess Diana was a true style icon, who had great taste in luxury watches and jewelry. She’s still the People’s Princess, and still sadly missed.