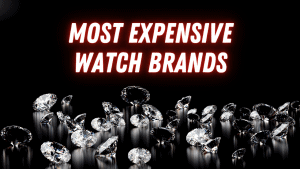 Many people fantasize about owning a watch from one of the most expensive watch brands in the world.

There are millions of people around who want to wear a watch from one of these very expensive watch brands.

The most expensive watches in the world are not just about status and prestige, they also have incredible quality, which is why so many people love them.

In this blog post we’ll go through each of the top 10 priciest watch brands, and give you a look at their most expensive watches.

Including all of their most expensive watches to date.

Graff is a British jeweler and watchmaker that strives for perfection with every single piece they produce.

Graff are known best for their diamond encrusted designs. Their diamond watches can cost from around $20,000 up to well over $500,000 and more!

Graff produces limited edition, one of a kind, timepieces too. Known as their Masterpiece models. They’ve even produced what’s considered today as the most expensive watch in the world.

The Hallucination timepiece from Graff is valued at a shocking $55,000,000! This very colorful quartz watch is made from extremely rare, colored diamonds.

This Graff Hallucination watch is all about the diamonds rather than the movement.

You can learn more about the most expensive watch in the world in our blog post dedicated to the beautiful Hallucination timepiece.

Graff also has another super pricey watch called The Fascination. This watch is instead made from beautiful white, clear diamonds. This watch also converts into a diamond encrusted bracelet, and a huge diamond ring.

Learn more about The Fascination 3-in-1 watch from Graff.

Patek Philippe are a Swiss luxury watchmaker that are considered one of the most valuable, collectable, and expensive watch brands in the world.

Currently Patek Philippe holds the title for the most expensive watch ever sold at auction. It was their Grandmaster Chime Ref. 6300A-010.

Yet, once you buy a Patek Philippe watch it’s usually set to go up in price year on year. As these watches are very scarce and so well made.

Breguet is one of the most luxurious watch brands on earth. The company was founded in Paris, France back in 1775 by Abraham-Louis Breguet.

Abraham-Louis Breguet was the watchmaker who invented the tourbillon. He also produced watches for many of the European royalty. From Napoleon, to the Tsar of Russia, to the infamous Marie Antoinette.

The most expensive watch from Breguet is a very old timepiece that was commissioned for the last Queen of France.

The Breguet No.160, or the Marie Antoinette watch, took 44 years to finish, and was first commissioned by a lover of the Queen in 1783.

You can see this gold pocket watch on display in the Museum of Islamic Arts, in Jerusalem.

Today Breguet is still considered one of the world’s most luxurious and prestigious watch brands. Their timepieces are still classics and done in the unique Breguet style.

Jacob & Co. is an American luxury watch company that produces some of the most expensive watches in the world. With a price range from $30,000 to over $100,000 or more for a watch.

Founded by Jacob “The Jeweler” Arabo and his wife Giselle Bennani-Arabo in 1990, in New York City. Jacob & Co. has become world famous for their diamond watches that cost millions.

Their Billionaire Watch is their most expensive diamond watch to date, costing $18,000,000.

This watch was bought by the wealthy world champion boxer Floyd Mayweather in 2018.

Rolex is one of the world’s most popular and most expensive watch brands around today.

Founded in 1908, this watchmaker has so many famous watches to date, that it’s hard to keep track. From the Datejust, to the Submariner, to the GMT-Master, and the Daytona Cosmograph.

Rolex deserves their title for one of the best watch brands today. Learn more about Rolex’s history in our blog post on the brand.

In terms of prices, there is a wide range depending on the Rolex watch that you choose. However, the average price of a Rolex today is around $12,000.

But, Rolex also has many timepieces that go for so much more. You’ll find many vintage Rolex’s fetching huge amounts at luxury watch auctions.

The most expensive Rolex watch ever sold at auction was actor Paul Newman’s Rolex Daytona that sold for $17,750,000 at a Phillips auction in New York, in 2017.

With a history in watchmaking stretching back to 1755, Vacheron Constantin is one of the most prestigious luxury brands on this list.

Like Patek Philippe, Vacheron Constantin is part of the Holy Trinity of Swiss watchmaking.

Vacheron Constantin also holds the title for the longest running watch manufacturer. They’ve never stopped producing watches or watch parts since they were founded in 1755.

With this long and prestigious history it’s no surprise that Vacheron Constantin is known as one of the most expensive watch brands in the world.

Their timepieces can start from around $15,000 and go up to $50,000 and into the millions. The Patrimony is their most affordable watch collection.

Currently their most expensive watch is also the world’s most complicated watch. It’s the Vacheron Constantin Ref. 57260.

This very complex pocket watch was released in 2015. This watch has 57 complications in total. It took 8 years to create and is housed in a beautiful white gold case.

Hublot is a Swiss company founded in 1980. Founded by Carlo Crocco, Jean-Claude Biver, and Ricardo Guadalupe.

They focus on creating hype around their Swiss made watches, with their Big Bang collection being their most famous collection.

The most expensive watch from Hublot is simply called The Hublot. It was a diamond encrusted Big Bang Hublot watch and cost an insane $5,000,000.

The Hublot was made for Jay-Z, from his wife Beyonce in 2012, for his 43rd birthday.

Hublot is a very controversial brand among watch enthusiasts today, learn why in our blog post on why everyone hates Hublot.

Piaget is another one of the world’s most expensive watch brands, however, probably not as well known as some of the other brands on this list.

Piaget was founded in 1874, in Switzerland. This Swiss watchmaker specializes in luxury watches and jewelry.

Their most expensive watch is their diamond encrusted Emperador Temple watch. It cost a whopping $3,300,000.

The Emperador Temple diamond watch doubles as a diamond bracelet. As the watch’s dial is hidden and protected within a diamond case, that can cover it entirely.

Overall Piaget are best known for their diamond, and jewelry watches. Along with timepieces that have ultra thin mechanical movements.

They’ve even created one of the thinnest movements ever made at just 2 mm thick!

A Piaget watch can cost from around $15,000 and can go to $50,000 and beyond for their more bedazzled and thin Piaget timepieces.

This German watchmaker holds the title for creating the most expensive watch ever made in Germany.

A. Lange & Söhne is easily one of the most expensive watch brands in the world. Their masterpiece is their Grand Complication. Which costs a whopping $2,500,000.

A. Lange & Söhne are known for their watches which are so complicated they take years to produce.

These German watchmakers have been in business since 1845 and have become one of the most respected luxury brands in the world.

Each year only 5,000 A. Lange & Söhne watches are produced. Making these timepieces scarce and even more valuable.

This German watchmaker resides in the town of Glashütte. This area is known as the watchmaking hub of Germany.

Learn more about other luxury German watch brands from this region.

Jaeger LeCoultre are one of the world’s top Swiss watchmakers, best known for their Reverso collection. The infamous Polo watch.

Jaeger LeCoultre is still one of the world’s most expensive watch brands. They’re best known for their art deco styled timepieces.

The average price range of a Jaeger LeCoultre watch is $5,000 to $50,000. While special one off timepieces can go for a lot more.

The most expensive watch ever produced by Jaeger LeCoultre was their Hybris Mechanica Grande Sonnerie timepiece.

This list of the most expensive watch brands in the world really opens our eyes to how pricey a watch can get.

From an insane $55 million, to still insane $2.5 million. Luxury watches are probably only going to get even more expensive.

Let’s wait and see what these watchmakers come up with next.

Now why not check out our review of the best luxury watch brands around today.