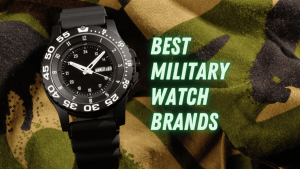 Military watches are a unique breed of timepiece. They’re rugged and tough, they’re the watch that you should be able to depend while on a mission.

These 8 military watch brands have been around for decades, developing strong reputations for quality and style as well as durability.

Military watches should be able to withstand the toughest conditions without being easily broken or damaged, which is why these military watch brands are perfect for any wearer looking to buy a new military timepiece.

Marathon is our top pick for the best military watch brand. They’re even the watchmakers who stock the US and Canadian armies with their military watches.

So if it’s good for actual army personnel, you know your going to love these tough timepieces.

Plus they’re military watches are Swiss made too.

You can discover Marathon military watches on Amazon.

This Swiss watch brand is an official supplier to the US military, and Canadian military. So buying one of their watches means you’re getting an actual military grade watch.

They can often have the words US GOVERNMENT printed on the dial, under the signature. However, this isn’t always the case, as some of their timepieces are sold sterile.

Marathon watches look rugged and mean. They make for the quintessential military watch.

Really easy to read dials, with an industrial style to them. These watches just look like they mean business.

What we love most is their dive watches.

Their watches usually come in a choice of either a Swiss quartz movement or a Swiss mechanical movement. Usually the quartz is the cheaper option.

If you’re after an excellent entry-level military grade dive watch. Marathon is a great pick.

You can find the Marathon WW194007 military dive watch on Amazon.

If you can’t afford a Marathon military spec dive watch. Then Marathon have an excellent selection of military grade pilot watches.

Their Swiss made military pilot watch is an ideal pick for a tough, durable, and more affordable military watch.

Casio is known worldwide for their cheap and durable timepieces.

Casio regularly makes it to the top of our reviews when we’re reviewing the best watches within a budget.

We consider Casio to be one of the world’s best affordable watch brands. You can even buy a Casio watch for almost nothing!

Casio has always been a popular choice of wristwatch among military personnel. Because they are inexpensive, durable, reliable, and accurate.

Take the Casio W800H-1AV. This digital watch comes with a water resistance of 100m (330ft). A stopwatch function. LED backlight, along with an alarm clock with a snooze button.

Then get this, you can buy this watch for a great price.

The Casio W800H-1AV, along with loads of other Casio watches, are available on Amazon.

However, if you are after something even tougher, but just like this digital Casio watch. Then G-Shock should have a watch just for you.

Now if you’re willing to stick with a digital watch, but spend a bit more. Then G-Shock is the next step up from Casio.

G-Shock started out as a watch collection of Casio. But due to its huge popularity, G-Shock has practically grown into their very own brand.

These watches are tough, chunky, shock-resistant, and come decked out in handy features.

G-Shock are super popular military watches, because their watches are so tough.

Casio’s G-Shock even holds the Guiness World Record for the toughest watch in the world, with their DW5600E-1 watch. Which survived a 25 ton truck rolling over it!

You can get the G-Shock DW5600E-1 for an extremely affordable price. So worth it for the level of toughness that this G-Shock watch can deliver.

Another one of their tough popular watches from G-Shock is their Rangeman collection. An ideal choice for military personnel.

The LCD display includes a compass, altimeter, thermometer, sunrise/sunset time, calendar, alarms, and more! These watches have the latest technology to keep you on track wherever your adventures take you.

Get the G-Shock GW9400 Rangeman collection on Amazon.

Victorinox is not just a Swiss watch brand. This is also the brand who created the Swiss army knife. A staple piece of any soldier.

Since 1989, this Swiss brand has been making tough military style watches.

Victorinox like to put their watches through a bootcamp from hell. They perform around 100 stress tests for each of their watches. To ensure their timepieces are as hard as nails.

Their I.N.O.X. range is one that you should go for if you want a military grade mechanical timepiece. These watches are the toughest and most durable of the Victorinox watches.

They come with a water resistance of 200m (330ft), and have anti-magnetic shield around the automatic movement. To ensure that your watch stays ticking even when around magnets.

You can find the Victorinox I.N.O.X. collection on Amazon.

These watches are also a popular watch for firefighters too. With the Victorinox brand having ties to Swiss and New York city firefighters.

Their I.N.O.X. Carbon range is the top of the range mechanical watch that can handle temperatures as high as 1,260 °C! Which is 2300°F!

The perfect timepiece for a military personal, as well as for firefighters of course.

You can also find the Victorinox I.N.O.X. collection on Amazon too.

The Luminox Navy SEAL watch is the military watch that made the Luminox watch brand famous among the Navy Seals.

For over 25 years, Luminox has partnered with the world’s toughest maritime commandos, the Navy Seals. To continuously hone and refine a watch tough enough and useful enough for their missions.

The cool thing about Luminox watches is that they are always visible.That’s thanks to their Luminous Light Technology.

The Luminox Navy Seal watches guarantee over 24 hours of continuous light from only one second of exposure to sunlight!

So if you need a watch that can always be visible, then a Luminox military watch is a great choice.

Their watches are also Swiss made, with a Swiss quartz movement powering this series.

Find all their Navy Seal watches on Amazon.

Plus this watch comes in a really cool military style watch box. Check out an unboxing of this watch in the video below.

They were even the first to produce a Soviet dive watch.

This military dive watch is still available today, and remains their most popular model. It’s called the Vostok Amphibia (or Amfibia), and was first released in 1967.

Vostok produces timepieces with the most simplistic designs. Following the same designs from the past.

Vostok watches are popular for their tough mechanical military watches, and their retro looks. They’ve got a serious cult following today among watch enthusiasts, and they’re a really affordable military watch brand.

You can buy a Vostok for around a very reasonable price, and you can find a huge selection of Vostok Amphibia military dive watches on Amazon.

However, if you buy a Vostok Amphibia, you should swap the bracelet for a nylon strap. The steel bracelet just isn’t that great, and the nylon straps make this watch even more retro.

British military watch brand, CWC, have been supplying timepieces to the Royal Navy, RAF and British Army for years. All their watches are made with military specifications in mind.

They’re tough enough for any adventure you may pursue!

It doesn’t matter what kind of watch it is, like a pilot or a diver Or if it’s a watch that’s issued by the army. All CWC watches are Swiss made and durable.

Not sure which one would suit your needs? The CWC online store has an extensive choice of military watches to browse.

They also offer a great range of NATO straps, so that you can give any of your watches a military look.

This British watch brand has been in production since 1892. Elliot Brown specialize in making watches for those who love adventure.

They are based in Dorset, in the UK. This is a coastal area of Britain, meaning all of their military watches have been made with coastal living in mind.

Their Holton Professional timepieces were developed specifically for use by military personnel. However, if you want your own bespoke military timepiece then contact Elliot Brown today, as they can custom make watches.

Their Holton 101-001-R06 watch is one of our favorite timepieces from their military collection. It has the look of a vintage 1970s military dive watch that has been made modern.

Comes with high grade C3 SuperLuminova for luminosity, and a scratch resistant sapphire crystal too.

You can find all their military timepieces and other watches on the Elliot Brown website.

If you’re after a military watch, then you’re in luck, because you’re spoilt for choice nowadays.

You can pick up a watch that has the military specs approved by the US army, with a Marathon military watch.

Or why not go for a Soviet era military dive watch with a watch from the Vostok Russian military watch brand.

Or simply stick to the super popular Casio, and G-Shock. With their super affordable and super tough digital watches.

Today, civilians are spoiled for choice with the military watch brands out there.

What kind of watch does military use?

It’s difficult to pinpoint the exact definition of a military watch.

However, modern military watches worn by military personnel are durable, tough, accurate, and reliable watches. They should come with shock-resistance and have a decent level of water resistance. They should be easy to read, and have great luminosity.

They should be powered by a mechanical movement that is super reliable. Or else they should have a reliably accurate quartz or solar powered movement.

Extra functions like a stopwatch function, an alarm, a calendar, and even a GPS or a digital compass. Are all popular features on military watches today.

What is the best watch for Military?

A tough, durable, and reliable watch is what makes the best watch for the military.

There are a few best watch options to choose from for the military. They include:

Why do the military wear their watches backwards?

Military personnel wear their watch backwards, or upside, so that they can read their watch easier while they’re holding a gun.

What is a good cheap military watch?

If you’re on a budget and in need of a good cheap watch, then Casio watches are a perfect pick. They are durable, come with lots of features and they are cheap.

What is the toughest watch in the world?

On the 30th of October 2017, Casio let a 25 ton truck roll over their G-Shock DW5600E-1 watch. After this test the watch was seen to be working perfectly.