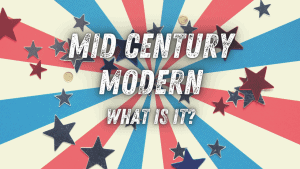 What is mid century modern design?

If you are wondering that, then this blog post will help you learn what was the American Look of the 1940s through to the 1960s.

Learn how mid century modern design came to be, what was it influenced by, and what were some of the key defining design elements.

Plus we’ll show you some of the best mid century American style watches from top American watch brands.

What is Mid Century Modern Design?

Mid century modern design is a term that is used to describe American design and styles that originated during the 1930s through to the 1960s.

Mid century modern design is often referred to in a number of different ways. Yet it all means the same thing. It can be called:

Overall the mid century modern design took traditional designs and gave them a futuristic twist. This style was all about cool, sleek lines and shapes. This design also loved beautiful forms, while being very functional too.

This mid century American style could be seen in all areas of life. From architecture, to furniture, to cars, and of course fashion. We’ll take a look at the effect of this design style on the American watch industry later in this blog post.

This design influence was not just limited to America though, it could be seen worldwide, from Europe to Asia.

Mid century modern design was influenced in part by the Bauhaus movement. Which was an industrial design movement that originated in Germany.

When Bauhaus designers and artists emigrated to America during the 1930s. They brought with them their Bauhaus creativity and designs.

What was the Bauhaus movement?

The Bauhaus movement was started by a German art school, called the Bauhaus school. This educational institution was founded by Walter Gropius in 1919, and it lasted until 1933.

Gropius’ goal was to form a community of artists and designers that could really experiment with their creations.

The Bauhaus movement revolutionized design. Its effects can especially be seen in the design of furniture. With many legendary pieces created in this style.

Bauhaus designs have been very popular in art, as well as fashion. Watches designed in the Bauhaus style have especially grown in popularity over the years. With many top brands releasing Bauhaus inspired collections.

Sadly the Bauhaus movement was cut short due to the coming of the Second World War. With many Bauhaus designers continuing their movement in the United States.

With the end of the Second World War in 1945. American households had a lot more money to spend, and this brought about a boom in consumerism. More families moved into the suburbs, bought more stuff, and had more babies.

The 1950s and the 1960s in America saw a cultural revolution, which brought about a new era for American design.

This period in time after the war has been coined as the Golden Age of Capitalism. This economic boom for America lasted all the way until the economic crash of the 1970s.

At the time mid century modern design was often simply described as the American Look.

This design can be hard to pinpoint down to exactly what it represents. As it spanned many decades. However, here are the overall design elements of mid century modern design that stand out and make this style special.

Functionality of the products and designs of the mid century modern, were always just as important as having a beautiful form.

The everyday lives of your average American were getting easier and easier at the time. Thanks to many new and practical inventions.

Take a look at this promotion video from the 1950s that walks you through an all electric powered home in the expanding suburbs of mid century America.

As electricity was starting to power all areas of our lives during the post war period.

You can see this 1950s home packed with so many practical appliances and furnishings. What we’re also struck by is how beautiful and comfortable the home looks too.

It would make for a perfectly comfortable and functional, yet gorgeous, family home.

Mid century modern design was all about sleek lines and uncluttered design. Taking inspiration from the Bauhaus movement before it.

Geometric shapes were widely popular at the time.

We can see this love of exploring unusual, yet sleek shapes in furniture especially.

You have to remember that at this time America was full of hope and rebirth following the end of the tragedy of World War Two. America especially was on a high after winning the war.

Americans were excitedly looking to the future. With many Americans now able to afford modern home comforts thanks to a booming economy.

In this 1959 video from General Motors, we can take a peek into the design process of a mid century American Chevrolet.

Their car designs had a really cool futuristic design element to them. Taking the classic elements of the car, but giving it a whole new twist to make it stand out.

Watches are an area where we can see the influence of mid century modern design even today. In the style of watches made during this time period.

America had large American watchmakers like Hamilton, Timex, and Bulova. All three of these watch brands are still around today. With all three still rereleasing mid century American style watches.

We’ll take you through four classic watch collections that embody the design elements of the mid century modern design.

The Hamilton Electric was the world’s very first electric watch that was made available to the public. This timepiece was revolutionary at the time when it was released first in 1957.

Remember this was a time before the invention of the quartz watch (which happened in 1969). So all watches were mechanical at this time.

The Hamilton Electric was iconic due to it being one of the first watches powered by a battery. This watch was really the start in revolutionizing how watches kept time and were powered.

The eye catching asymmetrical case is what makes this watch so iconic. It takes on a futuristic look that was very popular in mid century modern design.

You can still purchase this mid century timepiece today from Hamilton. As the brand regularly re-releases this legendary collection. A great pick to channel mid century modern design today.

Timex was, and still is, an American born watchmaker that produces some excellent timepieces.

Their Timex Marlin mechanical watch was released in the 1960s. It was a super practical, affordable, water resistant watch built for everyday life.

The Marlin from Timex embodied the practicality and functionality of the mid century modern design. The commercials for this watch collection in the 60s involved putting this watch through tests to show how durable it was.

As the Timex slogan was all about how reliable Timex watches were; “Timex takes a licking and keeps on ticking”.

The Marlin cost the consumer just $9.95 back in the 60s. Which is around $90 in today’s money. A very affordable timepiece.

The Marlin watch from Timex is even available to buy today. As Timex did a re-release of this lovely retro watch.

Bulova was a big watchmaker for the Allied forces during the Second World War. Producing field watches for American soldiers Then this watchmaker went on to create timepieces for the American consumer during the post war era.

However, the Bulova Accutron was one of their most successful watches during the mid century modern design revolution.

The Accutron watch collection was first released in 1960. This watch is often regarded as Bulova’s most innovative timepiece to date. It was a legendary watch at the time.

What made this watch different, was that instead of using a balance wheel, like all other mechanical watches before it. The Bulova Accutron watch used a tuning fork instead.

This made the watch much more accurate and reliable. As well as making this watch wildly popular at the time.

Check out the 1960s Bulova commercial below explaining just how accurate this watch was.

Mid Century Modern design has only grown in popularity over the past decade. With many choosing to incorporate mid century American styled watches, cars, furniture, and architecture into their lives.

One thing for sure is that the America of the 1940s through to the 1960s really left its mark on the design world today. With their sleek lines, futuristic designs, and functionality remaining memorable to this day.

Why not take a look at all the iconic watches James Bond wore from the 1960s through to today.