An Introduction To Microbrand Watches And Crowdfunding 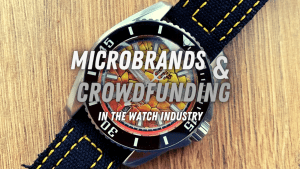 This is a guest post by Mike Richmond from Wristwatch Review UK.

You may have heard of watch microbrands. Much like the phenomenon of the microbrewery, a multitude of small, independent watch brands have begun to emerge.

Most of them resemble mushrooms, popping up out of nowhere onto the internet and vanishing almost as quickly.

These microbrand watches divide opinion in the watch world. Some enthusiasts enjoy buying great specs for low prices, and the less conservative designs that a small, focused production run allows.

Others worry that there will be no after sales support if the company ceases trading.

What makes a microbrand?

It’s hard to say what a microbrand is with certainty, and opinions are strong on the issue. Generally a microbrand will be a one-person operation, who outsources production and makes low numbers of watches.

Most sales will be done over the internet, with crowdfunding being a common means of raising the capital to produce the watches. Watch microbrands generally use off-the-shelf movements, most commonly those produced by Seiko, Miyota and sometimes Sellita.

The most famous crowdfunding website is Kickstarter. It’s a website that allows the developers of new products to remove some of the risks associated with funding a business.

It essentially acts as an escrow, allowing them to raise funds from the potential end-users of their products. But it only releases the money to them if they meet a certain target funding level which they determine before running a short campaign for 30-60 days.

This means that if there is insufficient demand for their products, they do not hit their target, and backers have their money fully refunded.

Is crowdfunding the same as buying shares in a company?

If you buy shares in a company then you will own part of the company. That you can either sell on, or retain to generate a future income through dividends.

With crowdfunding it is more like pre-ordering a product – although you are not actually guaranteed to receive anything.

Can I get my money back?

With most crowdfunding platforms you can generally cancel or change a bid while the campaign is running. Once the campaign is over, and your money has been taken, you will only get a refund if the company you funded agrees.

What are the risks of crowdfunded microbrand watches?

There are some risks in backing a crowdfunded microbrand watch:

If the company sets its funding target wrong, they could run into problems later. Beware of campaigns with a very low target as the company may not be able to deliver the product.

You could lose your money. Company failures can occur at any time, and your credit card can’t help you as you’ve not actually bought anything.

Delays are inevitable when backing a crowdfunded watch. Take estimates of production time with a huge pinch of salt. The best brands will regularly update backers on progress, but there are some nightmare stories out there.

After sales service can be a problem. Because most microbrand watches use off-the-shelf movements. You should be able to find a local watchmaker to repair your movement. But any custom parts such as hands, cases and bezels will be hard – if not impossible – to come by because the watches are produced in tiny numbers.

What are the benefits of crowdfunded microbrand watches?

There are, however, some real benefits to backing a crowdfunded microbrand watch:

Crowdfunding allows off-the-wall designs to find buyers. Big brands cannot afford to take a risk on too bold a design so you will find watches that are truly unique.

You will get a generous discount for being an early backer of a crowdfunded watch. Look out for inflated “RRPs” that only make your savings look bigger. As some microbrands do all their business on Kickstarter and will never sell any watches at retail price.

You will often get extra perks – for example an upgraded strap, or a special dial that is only produced for that campaign.

Is it safe to back a crowdfunded watch?

Generally, crowdfunding is a relatively safe place, with few projects completely failing to deliver, but you should weigh up the risks and benefits.

Due diligence is crucial

Crowdfunding sites can be slow to respond to fake campaigns and copyright infringements. It’s sensible to join one of the microbrand watches groups on Facebook so you can benefit from the experience of its members.

Ideally, look for video or written microbrand watch reviews. So that you can get an idea of whether the watch is as good as it looks. Legitimate brands will send out review samples to trusted websites that do not take payment for reviews.

Over at Wristwatch Review UK you will find news and reviews of all the latest watches from new and established microbrands, along with honest photos and videos that let you see them in action.