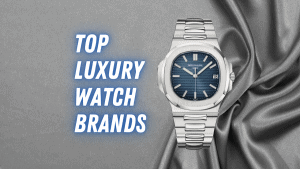 This is an ultimate guide to the top ten most prestigious, luxury watch brands in the world.

This is a controversial topic. As everyone will have an opinion.

However, we’ll delve into why each of these luxury watchmakers has made this list.

We won’t focus only on luxury Swiss watch brands.

So, is your favorite luxury brand included?

Find out why each luxury watch manufacturer has made the top ten list.

Patek Philippe is one of the top luxury brands in the world.

This is a Swiss brand, who is part of the holy trinity of watches. Along with the other two luxury Swiss watchmaking greats; Vacheron Constantin, and Audemars Piguet.

Patek Philippe is one of the great watchmakers that is still a family-run brand.

Patek Philippe has been in the Stern family since the 1930s. Yet, they’ve been making watches since 1839.

They’re known for being an heirloom watch brand. With their timepieces passed down through generations.

This manufacturer is one of the most exclusive luxury watch brands in the world. Only producing 50,000 watches each year.

The reason for the low numbers is due to the insane amount of work that goes into a Patek Philippe watch. On average a watch can take 9 months to produce.

This makes this brand super exclusive.

Plus Patek Philippe is known for being an investment luxury watch brand. They hold their value.

This brand currently holds the title for the most expensive watch ever sold at a watch auction. It was the Patek Philippe Grandmaster Chime sold for $31 million dollars!

You can learn more about that watch and the other most expensive watches in the world.

Rolex is probably the most famous of the luxury watch brands on this list.

And probably the most popular luxury watch brand worldwide.

Many of Rolex’s watches have a very distinct look. You can often easily spot a Rolex watch.

Rolex’s like the Datejust model linked above. Have the distinct Rolex feature of the fluted bezel. This makes the watch’s bezel reflect light from all angles.

Rolex was also the first watchmaker to create a date complication on a watch.

The Oyster Case is another Rolex specialty. First created in 1926, and is regarded as the world’s first water-resistant watch.

Now Rolex uses a metal that no other luxury watch brand uses. Called 904L, it’s a metal that is super difficult to work with. Yet super durable and has a high shine factor.

The perfect metal for their luxury stainless steel watches.

This watch brand is famous for its tough, yet luxurious, tool watches. Such as their Submariner collection, or GMT range.

The Rolex Submariner was featured in many of the James Bond films starring Sean Connery.

The German watchmaking giant is A. Lange & Söhne.

This watchmaker is located in Glashütte. A hub for watchmaking in Germany.

This luxury watch brand only produces around 5,000 watches each year. Making them exceptionally rare! With the lowest production rate on this list.

The quality of their movements is celebrated. Especially in their chronographs.

Their Triple Split Second Chronograph is a real feat of mechanical watch engineering. Considered one of the ultimate chronographs that you can own.

Check out the video below to get a feel of the Triple Split Chronograph in action.

Vacheron Constantin is another member of the holy trinity of watches. Along with Audemars Piguet and Patek Philippe.

This luxury Swiss watchmaker is one of the oldest and most prestigious brands in the world.

Vacheron Constantin is the oldest manufacturer of watches in the world that has never stopped operations. Since 1755!

They’re known for making complicated masterpieces in the traditional way.

One of their unique and very complicated watches is their Celestia Astronomical Grand Complication 3600.

It takes the popular moonphase watch to a whole new orbit. Check out what it tracks in the video below.

Also their Grand Complication Reference 57260 masterpiece. Which is currently the most complicated watch in the world with 57 complications.

This watch is also one of the most expensive watches in the world. Valued at over $8 million dollars.

Vacheron Constantin watches are also very scarce. The luxury watchmaker only produces around 20,000 watches per year.

This was the watchmaker who invented the tourbillon and who made watches for the royal court of Louis XVI and Marie Antoinette.

This brand is steeped in heritage. Dating back to 1775.

Such as the Engine-turned dials. Which are highly decorative, distinct, and produced by hand.

Also, the Breguet hands, which were invented in 1783 and are still used today. Or the Breguet numerals, again a staple since 1790.

And of course the secret signature on the dial. Which Breguet started in 1795 to counter counterfeits. Still used to do the same today.

Another Swiss watchmaking great is Audemars Piguet. Considered one of the holy trinity watch brands. Along with Patek Philippe, and Vacheron Constantin.

They’re also another rare independent watch brand. Owned by both the Audemars family and the Piguet family still.

Their Royal Oak collection is their most celebrated collection. This was the collection that sparked the world’s love of luxury sports timepieces.

With Audemars Piguet helping to create a whole new genre of watches from 1972. Just when the Quartz Crisis was taking off.

This is one of the world’s most exclusive luxury watch brands. With Audemars Piguet only producing 40,000 watches per year.

Like their Haute Joaillerie Sapphire Orbe, which is valued at over 900k. Set with over 12,000 diamonds. It doubles as a watch and a dazzling bracelet.

Audemars Piguet has also constructed a new watch museumin Switzerland. Which you can book and explore the brand further.

Cartier is a luxury jewelry and luxury watch brand.

This Parisian brand is best known for its timeless watches. Their two most famous timepieces that are still in production today are the:

Both originated in the early part of the 20th century. Designed by Louis Cartier.

The Tank watch was designed in 1911. It was inspired by the tanks that were used in the First World War on the Western front.

Cartier is now owned by one of the largest luxury watch groups in the world, the Richemont Group.

Zenith is another luxury watch brand from Switzerland. And this brand was almost lost for good during the turbulent Quartz Crisis of the 70s and 80s.

Check out the short video below about how Zenith survived this crisis due to one man.

The El Primero movement is what sets this watch brand apart from its competition.

The El Primero movement still powers their watches today. This luxury brand is still best known for its high-precision chronographs.

The only fashion house on this list is Bulgari.

This Italian watch brand is famous for its beautiful, jewelry-style watches.

You’ll often see the luxury brand spelled as BVLGARI, yet it’s most often written as Bulgari.

Bulgari watches really make a statement. Their timepieces are often like pieces of jewelry, as well as being a watch.

They’re a combination of Italian design with Swiss-made watch movements.

The snake form is an iconic signature of the Bulgari brand. With many of their bedazzled jewelry and watches taking the serpent form.

This design method takes a lot of skill to master. Yet, it is now featured heavily in Bulgari timepieces.

Check out the history of Bulgari and their signature technique below.

The Swiss luxury watch brand Omega. Has a star-studded reputation.

This is the luxury watchmaker that designed the watch worn on the wrist of astronaut Buzz Aldrin when he stepped foot on the Moon.

This timepiece is still in production, it’s called the Speedmaster Moonwatch Professional. A powerful chronometer that’s also a slice of history too.

Omega also features heavily on the wrist of James Bond. With Daniel Craig and Pierce Brosnan only wearing Omega watches during their time as the 007 agent.

Omega released a special edition 007 Omega watch for the James Bond films, like No Time To Die. Again an Omega dive watch is featured, this time made from titanium.

This brand advertises aggressively. They sponsor many huge events and feature in films. Which we can see with Bond, as the Omega Seamaster watch took a starring role in the movie’s trailer.

Learn more about all of the Omega James Bond watches in detail.

Check out other luxury watch brands from Switzerland that never made this list.