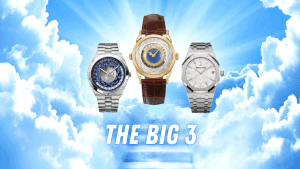 Sometimes you might hear them referred to as the big three as well.

Read on to learn what makes these brands so special, and why they are referred to as holy trinity watches.

Founded by Jules Louis Audemars and Edward Auguste Piguet in 1875. Audemars Piguet is still a family run business. One of the few big luxury watch brands not owned by a watch group. Both families have had generations involved in the running of the watchmaker.

The brand is a favorite among pro athletes. Celebrity fans have included Serena Williams, Lionel Messi, and Michael Schumacher.

To learn more about their history and timepieces. If you’re in Switzerland, you can book a visit to the Audemars Piguet museum. Located in Le Chenit, Switzerland.

Reasons why Audemars Piguet is in the holy trinity of watches:

Audemars Piguet never stops innovating and creating new masterpieces. Deserving a place as one of the holy trinity of watches.

The Stern family have owned Patek Philippe since 1932. With Henri Stern as the President of Patek Philippe from 1958. Then Philippe Stern took the presidency, and his son, Thierry Stern now is the head.

The Stern family has promised to keep Patek Philippe in the Stern family. Making the brand one of the remaining few family run watchmakers, and a brand who is not owned by a watch group. To the delight of their loyal fans.

They’ve been a favorite with many big names from the past. Including; Pablo Picasso, JFK, and even Queen Victoria.

Reasons why Patek Philippe is in the holy trinity of watches:

Patek Philippe is one of the most beloved, and expensive, watch brands in the world. Deserving a place as one of the holy trinity watches.

Started by Jean-Marc Vacheron in 1755. The brand was renames Vacheron Constantin. When the great grandson of the founder, watchmaker Jacques Barthélémi Vacheron. Paired with business, François Constantin, in.

Reasons why Vacheron Constantin is in the holy trinity of watches:

Vacheron Constantin is one of the world’s oldest watch brands. Never stopping manufacturing of luxury watches since 1775. Ensuring their place in the holy trinity of watchmaking.

Audamer Piguet, Patek Philippe, and Vacheron Constantin are members of the big three. These three Swiss watchmakers make up the holy trinity of watchmaking.

Are all magnificent in their own way. Their timepieces continue shaping the history of watchmaking. Both in Switzerland and around the world today.

Learn more about Switzerland and their famous watch brands.