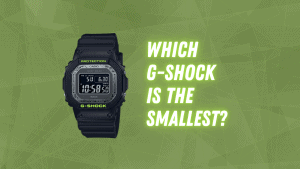 By no means is a G-Shock watch going to be what many would consider a small watch.

Instead they love their chunky, big watches, that will take up quite a lot of your wrist.

But what if you have a small wrist and want a G-Shock watch?

Then taking you from there to steadily larger G-Shock timepieces.

We’ve even included the slimmest G-Shock watch, which is the CasiOak.

Our aim is to help you find the best G-Shock watch for small wrists.

G-Shock are known for their large watches. However, there are many G-Shock watches that will fit a smaller wrist.

So, yes we think that G-Shock watches can fit smaller wrists.

If you love the look of a G-Shock and have a slimmer wrist, then pick a smaller G-Shock from this list below.

What is the smallest G-Shock watch?

The smallest G-Shock watch is the G-Shock GWB5600DC-1.

What is the slimmest G-Shock watch?

The thinnest G-Shock watches are from the G-Shock GA-2100 collection.

The G-Shock GA-2100-1A1 is one of these slim G-Shocks from this range. This G-Shock watch is almost elegant, thanks to its thin case.

This slim G-Shock has been nicknamed the CasiOak. As this watch reminds fans of the luxury sports watch from Audemars Piguet called the Royal Oak.

Thanks to its octagonal case shape.

These G-Shock watches start with the smallest G-Shock watch, and they will then get larger as we go down the list.

The latest, smallest G-Shock is the square shaped G-Shock GWB5600DC-1.

This watch has a case diameter of 42.8mm, making it the best G-shock for smaller wrists.

We love the look of this watch too. It has a subdued black color for the case and comfortable resin band. But the digital display has a cool metallic design to it.

However, there are more styles to choose from the entire GWB5600 collection.

This watch even comes with 200m (660ft) of water resistance, so you can wear it while swimming. Plus it of course comes with incredible amounts of shock resistance as well.

The main issue with this smaller G-Shock is that it can be difficult to read at times. That’s due to the darkened display.

However, this watch does come equipped with a backlight. So you can click a button to light up the screen and see a bright display at any time.

Overall this small square G-Shock is a tough solar powered timepiece. That will definitely look good and fit smaller wrists.

You’ll see many G-Shock DW5600 watches within this review of the best G-Shocks for smaller wrists.

This small G-Shock is ideal for smaller wrists. It is the watch that has been slapshot by a famous hockey player.

Just take a look at what happened in the original 1983 commercial below.

This G-Shock has been around since the 80s, and regularly gets updated and re-released. We can see its many reincarnations in the DW56000 range.

This watch is the same size as the updated model, the G-Shock GWB5600DC-1.

So if you like the size of the previous G-Shock, but need to stick to a smaller budget. Then this one is an ideal pick.

You’re still getting one of the smallest G-Shock watches for slim wrists. Just an older version for a better price.

It still comes with all of the main specs. Like huge amounts of shock resistance, 200m (660ft) of water resistance, and the handy backlight too.

However, this watch is a quartz powered watch. Instead of being a more Eco solar watch.

Now onto a G-Shock that is a little larger.

But this G-Shock GWM5610-1 is actually one of the shortest measuring G-Shocks out now. Measuring just 46.7 mm from lug to lug.

This G-Shock is very similar in looks to the previous G-Shock.

But this time this watch comes powered by solar instead. Meaning it comes with a rechargeable battery, and charges with any light source.

This G-Shock is also very easy to read thanks to its standard digital display.

So while this watch is slightly wider than the previous G-Shocks. It’s actually shorter in length, making it a top pick for anyone after a small G-Shock.

This watch is a recreation of the original G-Shock DW5000C, and was released on the 35th anniversary of the watch in 2018.

The G-Shock GMW-B5000D-1 is made from stainless steel, giving it a very cool look.

This watch also really looks like it’s from the 1980s, or specifically 1983 when the original G-Shock was released.

It has a retro vibe to it and a super on trend vintage aesthetic.

As for the size of it, it’s pretty small for a G-Shock. It is a great watch for anyone who wants a G-Shock watch but has a slim wrist.

Main drawback is the price. It is pricier than most of the others, but it is definitely one of the coolest G-Shocks on the list for sure.

Also this watch is a lot heavier than the non metal G-Shocks, making it feel more pricey.

Plus for your money you get G-Shock’s high tech Atomic Timekeeping capabilities. Which means this watch remains very accurate.

As well it’s a solar powered watch, so you’ve no need to worry about changing the battery.

One of the most eye-catching G-Shocks on this list is the gold G-Shock GMW-B5000GD-9.

This golden G-Shock is a recreation of the original 1983 model, just like the silver G-Shock is as well.

So it has that same vintage aesthetic and retro G-Shock feel.

This G-Shock is one of the best G-Shock watches for smaller wrists. Thanks to its case size of 43.2mm.

This watch is one of the few full metal G-Shocks. Made entirely from stainless steel and then coated in a gorgeous gold tone.

Like the silver version, this watch comes with solar powered movement. Also it has the accurate Atomic Timekeeping as well.

The G-Shock GMS5600-1 is a sporty looking G-Shock watch that will suit slim wrists.

The G-Shocks from this collection all come with a metal covered bezel, built from stainless steel. Then that’s paired with a comfortable resin band.

This G-Shock is fairly affordable, and you get a lot of shock resistance and plenty of water resistance for your money.

You can swim with this G-Shock no problem.

The main complaint about these watches is their appearance. A few have said that they look a bit cheap. This is a matter of opinion, as we think they look good.

One thing is for sure, is that this watch is one of the best G-Shocks for smaller wrists.

This watch also comes in a rose gold version as well.

Now onto a slightly bigger watch called the G-Shock DW5610SU-8. This watch is still square and will easily fit a smaller wrist well.

It comes in a cool grey tone. We really love the look of this watch.

This G-Shock is easy to read at night, thanks to its ‘Super Illuminator’ LED backlight and afterglow.

However, fans of Casio have said this watch is not as useful or as well designed as other G-Shocks listed here.

Some complain that the buttons are too small, and the watch can be difficult to read in bright light.

This G-Shock might look great, but there are more practical G-Shocks out there.

However, this watch still comes with all the epic shock resistance. Plus it has a high level of water resistance too, of 200m (300ft).

This watch also comes in a military green version, and is called the G-Shock DW5610SU-3.

Nicknamed the CasiOak by G-Shock and Casio fans. The G-Shock GA2100-1A1 is an almost elegant looking G-Shock watch.

Plus this cool watch takes the title for the slimmest G-Shock watch. As the watch only measures 11.9mm thick.

This watch is one of the larger ones on this list in terms of case diameter. However, we still think this G-Shock can look good on a slimmer wrist.

Where this watch got its CasiOak nickname from, is thanks to its octagonal case shape.

This case shape is similar to the shape of the world’s first luxury sports watch. The legendary Royal Oak watch from AP (Audemars Piguet).

However, luckily the slim G-Shock GA2100 doesn’t come with the same luxury price tag. It is instead a very affordable timepiece.

This watch also comes in a beautiful fiery red version too, making for one of the best red watches for men around today.

Check out the latest prices for these super slim G-Shock watches.

The G-Shock GBX100 line is one of G-Shock’s most popular square watch collections.

This line is built for surfers, and we’ve even crowned these G-Shocks some of the best surf watches around today.

We especially love the teal version of this watch, called the G-Shock GBX100-2.

The display on this watch is one of its best features. As it is very easy to read in all light conditions, including very bright sunlight.

It’s the 2nd largest watch on this list, so it is a lot bigger than the smallest G-Shock. However, we still think it can still look good on smaller wrists.

What’s cool is that this watch comes pre-programmed with around 3,300 surf locations from around the globe. You can access the data by connecting your phone to the app.

Important stats like low/high tide times, moon graph, or sunset/sunrise times can be checked out.

Discover more about these G-Shock surf watches now. You can also find this watch in other colors as well.

The G-Shock MRGB1000D-1A is the last of the best G-Shocks for smaller wrists, and it’s the priciest.

This G-Shock is part of their luxury collections. So for the higher price you’re getting a higher quality watch with more luxurious materials.

This G-Shock is made from titanium, a very strong and yet lightweight material. Both the watch’s case and bracelet.

It was made so as to reflect the aesthetic of Japanese armor. Tough, yet beautiful.

The bezel was giving a coating of DLC, that gives the watch a deep black color. Making it clash nicely with the silver. We also really like the red accents on the watch’s dial.

Overall it is a gorgeous watch. It is considered a mid-size watch, that’s why it is at the end of this review.

Plus this solar powered watch comes with smartwatch features too,. You can connect your smartphone to it to use them.

Check out what else this watch can do and all of it’s specs.

All in all the two best G-Shocks for smaller wrists, has to be the two G-Shocks watches linked below: