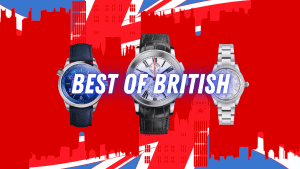 Are you a watch enthusiast and looking for the best British watch brands?

Whether you are new to horology or an avid collector, this blog post will review 15 of the most popular British watch brands.

Britain has a rich watchmaking past. However, many watch brands have relocated to Switzerland to manufacture their watches.

Yet, there is a revival of British watchmaking in recent years.

Discover the British designed watches on offer from the top British watch brands.

Mr Jones Watches is one of the top British watch brands, located in London. Their famous for their cool and quirky timepieces.

This brand is a trendsetter not a follower. And they pride themselves in making unusual watches. The Mr Jones watch collection is a treasure trove of cool designs.

Their watches make you see time in a different way. Like their Ascendant watch. Which is a watch that tells the time through the stars in a night sky.

Or how about reading the time through the teeth of a skull on your watch?

Check out all the watches from this cool brand on the Mr Jones Watches website.

If you’re after a luxury chronometer, then this British watch brand might be for you.

Bremont has been creating them since 2002. They only sell mechanical timepieces. COSC certified chronometers. They’re tough watches that go through some of the most rigorous testing before they’re watches are released.

They’re a favorite brand with many adventurers. And a big favorite among pilots, including fighter pilots. The brothers who began the brand are ex Royal Air Force pilots themselves.

The brand has released a Hawking collection full of limited edition timepieces. Dedicated to one of the greatest physicists in the world, Stephen Hawking.

This brand is a truly British watch brand, as they manufacture a lot of their watch parts in England, and assemble it all in the UK.

Check out their full collection on the Bremont website.

Vertex is one of the British watch brands that specialize in military watches. Watches that are durable, high performance and all come with the back up rubber and NATO strap.

Their two key collections are:

The M45 Collection is inspired by the watches of the World War II era. All their timepieces are a look to the past.

Even Vertex’s training videos that teach you how to correctly use and look after your new Vertex watch. Feel like they are set in the 1940s.

SWC is one of the top luxury British watch brands . The Schofield Watch Company (SWC) is an independent British brand.

They’ve got only one boutique shop on the River Adur, in Sussex. They sell their timepieces mainly on the online store.

Their timepieces have a cool look to them, high quality, and often have a minimalist style.

The founders of Christoper Ward had a goal. They wanted to make the “the cheapest most expensive watches in the world”.

They planned to do this through setting a; 3 times markup limit, avoid celeb endorsements, and sell only through their website. And in 2005 they launched the first online only watch brand.

Christopher Ward’s timepieces are premium pieces. And they’re a fusion of English design and Swiss manufacturing.

Their C1 Moonglow is one of their all time bestsellers. It is a beautiful moonphase watch, and will let you wear the moon.

Christopher Ward is one of the most loved, new British watch brands. They make a great choice for an entry level Swiss made dive watch.

Military watches are the staple of this British watch brand. CWC have supplied timepieces to the Royal Navy, RAF, and the British Army.

The Cabot Watch company (CWC) was started in 1972. They’ll celebrate 50 years of military issue timepieces in 2022.

All CWC watches are made to military specifications. They are durable timepieces. And all their watches are Swiss made. From pilot watches to diver watches, and of course the military issued pieces. This brand is made for those seeking an adventure proof piece.

You can shop their whole collection on the CWC online store.

Dent is one the most prestigious British watch brands on this list. As they were the watch and clock company that created the Big Ben clock!

This British bran was revived in 2008. When they released their first range of men’s watches. It was 40 years since they had a new collection.

A favorite brand of the royals since Queen Victoria. The Dent watches come with a royally large price tag today. And you need to arrange an appointment with Dent to even purchase one.

Luckily for us common folk, we can view their latest collections on the Dent website.

Some consider this British watchmaker to be one of the best watchmakers in the world.

It’s the British watchmaker Roger W Smith. His timepieces are at the luxury end of watches. They’re masterpieces, and they don’t come cheap.

You can check out the video above to learn more about the man himself, from his workshop on the Isle of Man.

Their first automatic watch is their Morar Diver. You can check out the Morar Collection on the Marloe Watch Company website.

The name of the dive watch comes from Loch Morar in Scotland. And it’s the deepest body of water in Britain. A great name for a dive watch that can go 1,000 meters deep.

We’ve even included the Morar Dive watches in our review of the best dive watches under $500.

Another brand that is Swiss made but with British design. Is Farer, a watch brand founded in 2015.

The Farer World Timer Automatic collection is the perfect watch collection for people who travel a lot. The pieces are designed to show 24 key cities around the world.

Pinion is a British watch brand that designs and builds their watches in England. Pinion began in 2013, in South Oxfordshire. Set up by designer Piers Berry.

They have a selection of chronographs, in their Elapse collection. And their TT collection has dual time-zone (GMT) capabilities. A great pilot timepiece.

You can view Pinion’s entire collection on their online store.

Garrick is a luxury English watchmaker, based in Norfolk, England.

Garrick’s collection is full of timepieces that are in the dress watch style. Many of their pieces are limited edition pieces. With just a few being produced each year.

Many of their watches express pride in their British heritage. Take their Norfolk timepiece. It celebrates Great Britain’s rich maritime history. Every piece is handmade to order too.

Elliot Brown is a British watch brand that is a favorite among those who love an adventure.

This a Dorset born brand, so all their pieces are made with the coast and sea in mind. Meaning they are shock resistant, rugged, and protected against water.

Their Holton Professional timepieces were developed with a branch of the British Armed Forces.

The brand even produces bespoke watches for military personnel. Just need to contact them.

This watch brand has a quintessential English name. It is a tribute to the legacy of George Graham, who was a watchmaker in London from 1695.

Their watchmaking facilities are now in Switzerland. With all their movements being Swiss made. So some may question whether this watch brand is even still British.

Their timepieces are luxury pieces. Many are limited additions.

As Geogre Graham was known as the “father of the chronograph”. The Graham watch brand produces many interesting chronographs. With their collection of Chronofighter timepieces.

Loomes & Co. are a British made British watch brand. The movements that they use are entirely in house made movements. And all other components are designed and made by them.

Two of their British made timepieces are:

They’re a beautiful selection of dress watches. The Robin & The Robina have a glass back which you can see the hand engraved movement through.

Now check out the best brands from American watch brands